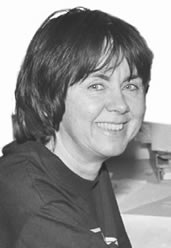 Ribosomal genes (rDNA) exist in two distinct types of chromatin, an 'open’ one that is permissive to transcription and a 'closed’ one that is transcriptionally refractive. The mechanisms that maintain the ratio of active vs. silent rDNA repeats are poorly understood, but silencing is one of the factors that influences transcriptional activity. Perturbation of rDNA silencing has been implicated in aging and human hereditary diseases. We have identified and functionally characterized a novel chromatin remodeling complex, termed NoRC, that mediates rRNA gene silencing. NoRC recruits DNA methyltransferase and histone deacetylase to the rDNA promoter, thereby triggering heterochromatin formation. NoRC-mediated changes in chromatin structure lead to repression of rDNA transcription and resetting replication timing from early to late. Moreover, we are investigating the role of noncoding RNAs in gene silencing. In the long term, these studies will lead to an understanding of the mechanisms that propagate the active and silent state of rRNA genes through cell division and will reveal how epigenetic defects cause human diseases.